When the sabbath was over, Mary Magdalene, and Mary the mother of James, and Salome bought spices, so that they might go and anoint him. 2 And very early on the first day of the week, when the sun had risen, they went to the tomb. 3 They had been saying to one another, “Who will roll away the stone for us from the entrance to the tomb?”4 When they looked up, they saw that the stone, which was very large, had already been rolled back. 5 As they entered the tomb, they saw a young man, dressed in a white robe, sitting on the right side; and they were alarmed. 6 But he said to them, “Do not be alarmed; you are looking for Jesus of Nazareth, who was crucified. He has been raised; he is not here. Look, there is the place they laid him. 7 But go, tell his disciples and Peter that he is going ahead of you to Galilee; there you will see him, just as he told you.” 8 So they went out and fled from the tomb, for terror and amazement had seized them; and they said nothing to anyone, for they were afraid. – Mark 16:1–8

You would think that Mark would end his story of the “the beginning of the gospel about Jesus Christ, the Son of God” (1:1) with a satisfying resolution, a happy ending. But he doesn’t.Anxiety rises after Jesus has been laid in the tomb. It has been growing all through the quiet of the Sabbath. The women are so eager to get back to the tomb with their spices and ointments, they can barely wait for sunrise.

On their way, they wonder who will move the stone for them. In all their preparations and planning, they seem to have forgotten this very important detail. The women apparently didn’t know the tomb was sealed and guarded, or they might have expected the guards to help them move the stone. It’s big, and they know they can’t move it themselves. The anxiety builds.

When they arrive at the garden tomb, they are surprised to find the stone already removed, but this does not bring them comfort. It only raises their concern. Who would have done such a thing? How would they have done it? 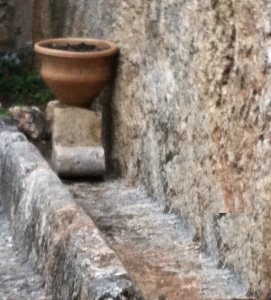 The heavy, custom-cut stone had rolled down a sloped trough to its destination over the door of the cave. Pushing it back up the slope would mean working against the law of gravity. Moving that stone would take a miracle.

The women step into the tomb. If it’s like the one we saw at the end of our trip to the Holy Land, there are two small rooms, carved out of the rock hillside near Golgotha. There is a small chamber just inside the entrance, and it opens into the place where a body would be laid.

Bodies were not embalmed after death, but were laid in a place where they could decompose undisturbed. The spices were to cover up the smell of decomposition, which the women assumed had already begun. After a year or two, the bones would be placed in an ossuary, and the tomb would be cleaned and prepared for another family member.

There would be places for two or three bodies to occupy the tomb at one time. Jesus must have been laid in the place on the left, because a young man dressed in white is occupying the place on the right.

According to the other gospels, this is an angel. He certainly speaks with more authority than a human would. And he knows things the women don’t know.

The anxiety meter rises again. Now the women are experiencing more than concern about possible vandals or thieves. They begin to recognize that what they are seeing is evidence of something beyond human knowledge. They realize that they are listening to a messenger from God, and any encounter with the living God is cause for fear and trembling.

These poor women don’t even have time to process so much information before the messenger gives them an order. “Go,” he says. “Tell his disciples and Peter that he is going ahead of you to Galilee; there you will see him, just as he told you.”

Elias Chacour is the retired archbishop of Akko, Haifa, Nazareth and All Galilee of the Melkite Greek Catholic Church. He describes himself as a “Palestinian-Arab-Christian-Israeli” but he’s quick to tell you than he was not born any of these things. He was born a baby, just like all of us were. Chacour has worked for peace among Israelis and Arabs throughout his life. Now that he is retired, he spends his time in Ibillin, where he built a school for all children, whether they are Christian, Muslim, or Jewish. This is where we heard him speak.

Before he would share his thoughts with us, he asked us to answer a question: “Why have you come to the Holy Land?” He didn’t get very many responses, so he kept prodding us. “Why are you here? Did you come looking for Jesus? He’s gone. Didn’t you get the memo? He isn’t here! He is risen! He has sent you out to spread the good news into all the world. Go do it!”

Archbishop Chacour was, for us, like that young man waiting for the women at the tomb. It wasn’t comfortable hearing Chacour’s questions, and it was even less comfortable hearing his urgent call to action. Listening to him, I could understand why the women were frightened. But why does Mark choose to let the story end at this point, with the women running away, too afraid to speak?

There’s a lot of speculation among New Testament scholars about the ending of Mark’s gospel. These eight verses are the only ones we can be certain belong to the original manuscript. Somewhere along the way, some copyist decided this was not a satisfactory ending. It’s too abrupt. It doesn’t include any post-resurrection appearances of Jesus. There isn’t any joyful realization that he is truly alive, just as he said he would be. So, over time, different endings were tacked onto Mark’s story, to make it more complete.

Maybe Mark intended to write more. Maybe he actually did, and that ending disappeared before there were any copies made from it. Most scholars think Mark knew exactly what he was doing. But if Mark wanted to shock his readers with an abrupt ending, wouldn’t it have been great for the story to have stopped right after verse seven, at the announcement of the resurrection?

Yet, it doesn’t. Mark gives us one more verse. He tells us that the women are terrified, and they run away, telling no one anything of what they have just seen. And that’s the end of the story, according to Mark.

What if Mark wrote an incomplete ending on purpose? What if he left the story hanging on fear and failure for a reason? Maybe Mark knew that no story about death and resurrection can have a tidy “The End” bound up in ribbons and bows. Maybe he wanted to make the point that this story isn’t over yet. The title he gave the whole book, after all, is “the beginning of the gospel about Jesus Christ, the Son of God.” (1:1) Maybe Mark leaves the ending open so that we can pick it up and continue the story.

Theologian David Lose notices a “persistent two-part pattern throughout Mark,” that reaches a climax here at the end. The first part is that those who are closest to Jesus often don’t get that he is the Son of God. Even when Peter confesses that Jesus is the Messiah, he doesn’t understand what that means. Every time the disciples or the religious leaders miss the point, they miss an opportunity to share the good news.

The second part of the pattern is that those who do understand who Jesus is aren’t reliable witnesses. Demons recognize him, but you can’t really count on a demon for a good testimony. The Centurion at the crucifixion realizes that Jesus is the Son of God, but who’s going to trust a Roman in first century Palestine? By the end of Mark’s gospel, we should be prepared for the disciples, even the women who have been most faithful, to follow the pattern, to miss the point. They run away, too afraid to tell anyone the good news. And that leaves us, as the least reliable witnesses of all, to tell the rest of the story. Because that story isn’t over at the empty tomb. It’s just getting started.

St. John Chrysostom was Archbishop of Constantinople and a great preacher of the Church in the Fourth Century. His name translates “John the Golden Throated One.” In many churches, John’s Homily for Easter Vigil is repeated every year, either during the Saturday night vigil, or at the earliest service on Easter morning.

The tradition in the Eastern Church for this meditation is that, at the mention of word “death,” people stomp their feet with joy because Christ’s death has trampled Death. In some churches, people also ring bells whenever heaven is mentioned.

This message from one of the early church fathers is so full of hope and joy, it serves as a wonderful answer to Mark’s gospel ending. Mark ends his story abruptly so that we might pick up the challenge to bear witness to the resurrection, no matter how unworthy we feel, no matter how “unreliable” we may see ourselves as proclaimers of the Good News.

So, get ready to stomp your foot when you hear the word “death.” If you don’t have a bell near you, you can jingle your keys when you hear the word “heaven.” When I get to the part that says “Christ is risen” I invite you to repeat that phrase after me each time I say it. This is an interactive sermon, and you get to help preach it. Are you ready? (Find the sermon here.)

The Lord is risen! He is risen indeed!

We stand as witnesses to this truth, and as such witnesses, knowing our reliability does not depend on who we are, but on what God has done for us in Jesus Christ, our Lord now invites us to his heavenly banquet. Alleluia! Let us keep the feast! Amen.

This site uses Akismet to reduce spam. Learn how your comment data is processed.

All that legal housekeeping stuff

© 2021 Jo Anne Taylor, all rights reserved. Unauthorized use and/or duplication of this material without express and written permission from this blog’s author and/or owner is strictly prohibited. Excerpts and links may be used, provided that full and clear credit is given to Jo Anne Taylor with appropriate and specific direction to the original content.

A daily dose of God’s touch in a minute...

Sharing the stories of our ancestors

Tim's Blog - Just One Train Wreck After Another

Life from the inside out.

Leanne Friesen
I'M WITH HIM
A Pastor's Thoughts

Looking at the Contemplatives and Mystics

Chasing the Promise
The Pietist Schoolman

Thoughts Shared from the heart.

Better conversations toward a better tomorrow.

What is going to happen?

An Episcopal Priest's Sermons, Prayers, and Reflections on Life, Becoming Human, and Discovering Our Divinity